Today I bring you an exam­ple of an inde­pen­dent band that seems to be Doing Things Right.™

I first became aware of the band from the mostly-excellent, but not often released, Cac­tus Killer Radio pod­cast. While the stuff CKR plays is var­ied, the com­mon thread that ties it all togeth­er is that, for the most part, it makes an excel­lent driving-at-night sound­track. I would often wait months to lis­ten to an episode, until find­ing myself alone in the car at night with a long dri­ve ahead of me.

When I lis­ten to an episode of CKR, I almost with­out fail need to make one or two men­tal notes to find out more about a band, or at the very least, find an MP3 of the song that caught my ear. (Oth­er bands I’ve found this way include My Teenage Stride, Spike, and Sing-Sing.) Episode 52, which fea­tured Qui­et Loud­ly’s “Over the Bal­cony,” had me rewind­ing to hear it again, mul­ti­ple times. I ulti­mate­ly shut off my MP3 play­er at the point in the pod­cast where the song began, so I could hear it again the next day.

I tracked the band down to their MySpace page, where I came across a blog entry promis­ing a copy of their never-to-be-released debut album Destroy All Mon­sters to “any­one that asks nice enough.” I went ahead and did that, and before long found a CD‑R and nice hand­writ­ten note in my mail­box. The disc had unfor­tu­nate­ly cracked in tran­sit, but on the strength of “Over the Bal­cony” and the kind ges­ture, I made a men­tal note to buy their soon-to-be-released (sec­ond) debut album, Soul­gaz­er.

The release date must have slipped a bit, because I checked their MySpace a few times in mid-2009 and found no sign of the album. Then it slipped my mind for a num­ber of months before, lo and behold, I checked in and found Soul­gaz­er had been released!

I knew I want­ed it on CD (I like mak­ing my own MP3s, and when disk space gets even cheap­er, FLACs), but the disc was only avail­able from this not-very-reassuring page. I bought it there any­way. I did­n’t get any e‑mails acknowl­edg­ing my pur­chase (aside from the usu­al Pay­Pal receipt), so I was a lit­tle wor­ried, and made a men­tal note to try to find some­one to con­tact if a few days passed with­out word.

What I end­ed up get­ting instead, seem­ing­ly out of the blue, was a ‘fol­low’ noti­fi­ca­tion from qui­et­loud­ly on Twit­ter! I did­n’t real­ize that I had pur­chased the album direct­ly from them. That they take the time to stalk track down their fans online is, well, com­plete­ly fuck­ing awe­some. While it’s typ­i­cal­ly my pol­i­cy to use social net­work­ing ser­vices for only keep­ing up with peo­ple I know, I was glad to make an excep­tion for them (even if most every tweet they tweet is about shows they’re play­ing in New York). 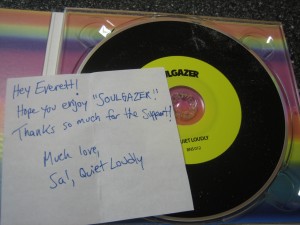 I took the ‘fol­low’ as my receipt and eager­ly await­ed the album’s arrival. It came a week lat­er, but I had­n’t tak­en into account that my only CD play­er was the one in my car, so I spun the disc for the next few dri­ves, wait­ing until I found a com­put­er with an opti­cal dri­ve, on which I could LAME up some MP3s.

I guess I did­n’t give the enve­lope a thor­ough enough look-through at first — and it’s a good thing I did­n’t throw it out — because I had missed some­thing else inside.

Seri­ous­ly. How awe­some are these guys?

I hope there’s some New York in my future, because I must see Qui­et Loud­ly live, per­haps many times.

Look, friend, Everett Guerny is a Miami copywriter who happens to know a thing or two about maintaining Linux servers — isn't that unusual? That means he's about as good at grep as he is at, uh, crushing copy for startups and big brands alike.