I’ve been think­ing late­ly, and I’m going to start a new series here on the blog, ten­ta­tive­ly titled stuff I know and take for grant­ed, but it’s stuff that a lot of peo­ple don’t know, you guys!

I may need to think of a bet­ter title.

I won’t, how­ev­er, let that stop me.1 These are things that the world may or may not need to know, but should cer­tain­ly have the chance to know.

Here’s my first one:

If you have a com­mon name on Twit­ter, you prob­a­bly get lots of errant ‘@replies’ because peo­ple don’t know how to use them.

A lit­tle back­ground: if you use Twit­ter — and I won’t fault you if you don’t2—you’re prob­a­bly aware that you can direct your post to anoth­er user by plac­ing their unique Twit­ter user ID after an @ sign some­where in your post. For exam­ple, if you want­ed to tell me I’m great, you’d say some­thing like:

I think that @everett is great!!

…and then my Twit­ter soft­ware client would alert me that some­one direct­ed a post my way. These are usu­al­ly called “replies” or “men­tions” depend­ing on the client you use. Sim­ple stuff, right?

Note that it just so hap­pens that my Twit­ter ID is “everett.” This is so because I reg­is­tered my account in mid-2006, ear­ly enough that first-names were still unreg­is­tered, and thus, avail­able as user IDs. Because I chose a com­mon name for my ID and quite a few peo­ple out there know peo­ple named Everett and some of these peo­ple don’t know what they’re doing, I often get posts direct­ed at me unintentionally.

I’ve got­ten used to it. Here are some exam­ples of places I was ‘men­tioned’ by mistake.

Not the worst advice, but I can’t take the credit. 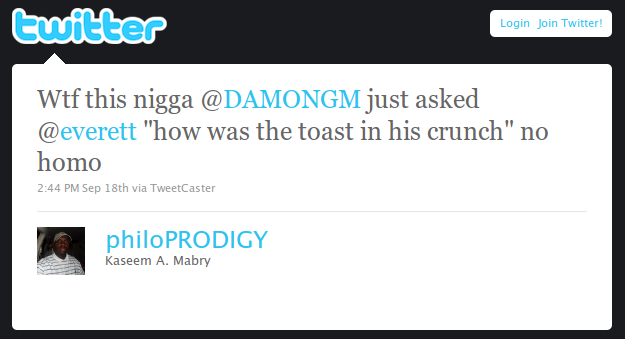 Not sure where I was on the evening of August 19th, but I’m not sure where Eli­jah’s sense of enti­tle­ment comes from either.

This exam­ple is inter­est­ing. Thanks to Twit­ter, I’ve learned that there’s a chain of bar­be­cue places in the Oak­land area called Everett & Jones, which a lot of peo­ple like to go to. Men­tions of E&J actu­al­ly get mis­tak­en­ly direct­ed at me a lot… and from every­thing I’ve heard, it makes my must-try list if I’m ever in the Bay Area again. Thanks, Twitter!

Look, friend, Everett Guerny is a Miami copywriter who happens to know a thing or two about maintaining Linux servers — isn't that unusual? That means he's about as good at grep as he is at crushing copy for startups and big brands alike.

Amusing Ourselves To Death
by Neil Postman